Australia Awards alumnus Dr Kamal Raj Gaire is working towards the development of agriculture and farming communities in Nuwakot, a hill district near Kathmandu, in Nepal.

Building better livelihoods for smallholder farmers through improved agricultural productivity, to increasing incomes and encouraging youth to become agricultural entrepreneurs, are among the many contributions Kamal is making to improve the quality of life of these farming communities.

Kamal completed his PhD with a focus on Land and Food Resources in January 2015, and Masters in Agriculture in 2007 – at the University of Melbourne, both made possible by Australia Awards Scholarships.

Kamal assumed duties as the Senior Agriculture Development Officer of Nuwakot in November 2015, at a time the district was recovering from the earthquake that struck the country, just six months before. Rural farmers were the hardest hit by the disaster in April 2015. The Nuwakot district was also badly affected. In addition to the loss of many lives and severe damage to property, the entire district was facing food insecurity challenges. Addressing these issues while restoring the agricultural sector was one of the immediate challenges Kamal had to face.  ‘It took an entire year for us to overcome food insecurity and bring the agricultural sector of smallholder farmers back to normal’, reflects Kamal.

At the Australia Awards Nepal Alumni Forum in July, Kamal shared the story of how he is using the knowledge and skills he gained in Australia to uplift the lives of farmers in Nuwakot.

“Limited availability of resources was also among the many challenges we faced”, says Kamal.

With just 70 staff of the District Agriculture Development Office to work with, looking into the needs of 54,000 farming households in the district was not an easy task. Reaching out in person to each of these households was not possible for Kamal and his staff. To manage this matter, Kamal connected with farmers’ cooperatives and self-help groups and is now mobilising his staff to support these cooperatives and groups in the district’s overall agricultural development.

Kamal has identified various areas for intervention to help farmers get better results. The first intervention of his focus is looking for ways to increase farmer income. In collaboration with different organisations and cooperatives, Kamal and his team are supporting smallholder farmers to improve their agricultural produce by providing skills development training to seed-support and market promotion. The initiative has produced impressive outcomes – with the national media reporting that the district earned over one billion rupees from potato and over 21million rupees from radish last year. The farmers are also making a better income from summer vegetables, cash crops, seed production, tomatoes, strawberry, tea, coffee, ginger, ground-apples, bees, and silkworm produce.

The second area where Kamal is actively contributing is to encourage youth to pursue agriculture and become entrepreneurs in the industry. Although Nepal is primarily an agricultural country, “not many youths are attracted to farming as it requires a lot of physical labour and dedication’, says Kamal. “To encourage youth in agriculture, my team and I are working towards farm mechanisation. We have also introduced rewards for the best farmers to highlight the message that agriculture has a good scope in the district. Proper agricultural practice coupled with dedication can surely ensure successful livelihoods even for smallholder farmers” adds Kamal.

Kamal is also working on improving soil health. He is conducting mobile camps in villages to test soil quality, and supporting farmers to improve the quality through activities such as agricultural lime, vermicomposting and cowshed improvement programs.

Uplifting the community through research and extension, market promotion, climate adaptation and safe food production is also among the areas that Kamal is focusing on. He has prepared several publications including booklets and brochures to help farmers and improve their knowledge on best agricultural practices. He is helping cooperatives in promoting their agricultural produce through a weekly ‘Farmers Market’ in Bidur, the district headquarter of Nuwakot.  Kamal is also providing training on required technologies to help farmers adapt to extreme climate conditions such as droughts and other natural hazards and support them in safe food production.

Kamal says none of the work he carries out would have been a possible if it were not for Australia Awards. 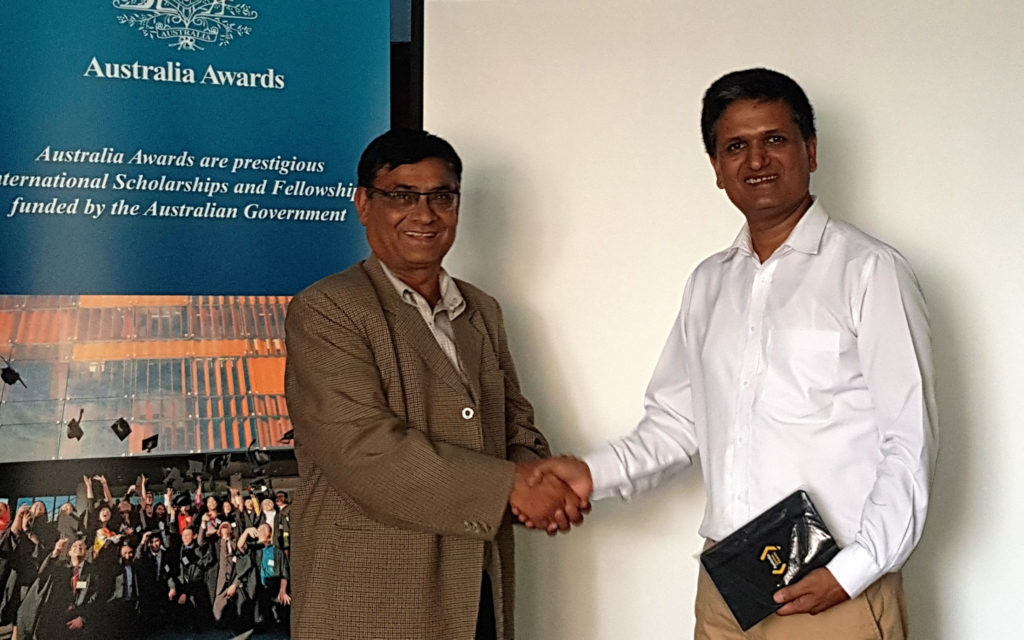 Dr Kamal Raj Gaire with the General Secretary of the Association of Nepalese Alumni from Australia.

“I had completed my Bachelors in Agriculture Science, and was working as a Government Extension Service Officer when I realised that the skills and knowledge I had was not enough to effectively carry out my responsibilities. I was looking for opportunities for further education and heard about the education system in Australian Universities from a friend. I researched and made comparisons to the classroom environment there and the local universities. I was fascinated by the prospect of student-led learning processes encouraged at Australian Universities, however, I never dreamt of actually studying there as my family was unable to fund the cost of studies”, recalls Kamal.

Kamal received his opportunity to study in Australia when he was successful in his application for an Australia Awards Scholarship.

“In 2004, I saw a newspaper advertisement and applied for the Scholarship. I would not have been able to undertake both my Masters and PhD without the financial assistance from Australia Awards for which I feel incredibly privileged. Throughout the course of my study, I received the support of my supervisors. I took several short and long courses that not only helped me in my core subjects but also helped me develop my soft skills and prepare myself to face new challenges. Australia Awards also funded the cost of travelling to both Nepal and Canberra for my fieldwork and conference participation. I was also privileged to have won a travel award from the University of Melbourne that made it possible for me to present findings of my PhD research at an international conference in USA“.

“Above all, I always found an element of nudge and reminder in every e-mail I received from Australia Awards to think about potential ways to contribute to Nepal upon return. I found them useful to keep myself on track and work even harder. Without the continuous support and encouragement from the program, I cannot imagine so smoothly overcoming one of the greatest yet rewarding challenges of my life. The skills and knowledge I gained from Australian academic institutions is helping me immensely in what I currently do in the field of agriculture and food security”.