Dr Gangaram Yadav, a veterinary doctor by profession, is a young and energetic Australia Awards alumnus who is passionate about improving the status of Nepal’s animal husbandry by using modern technology and skills.

By applying new technology in Nepalese livestock farming, Gangaram has a dream to establish a resourceful ‘pet and poultry clinic’ in his hometown to help farmers raise poultry on a commercial scale and in turn, make a substantial contribution to their income.

In 2015, Gangaram received an Australia Awards Scholarships to pursue a Master of Animal Science at the University of Queensland and returned to Nepal in December 2016. With the knowledge and skills in animal science acquired from a world-class university, he is now providing technical support to farmers as the District Livestock Officer in Taplejung, a hilly district in the Eastern part of Nepal.

Gangaram is now making the best use of the knowledge he gained in Australia.

Recently, he conducted a heat synchronisation research program for the Sinhal goat at Ankhop village in the Taplejung district. Heat synchronisation helps farmers bring a group of animals into the oestrus cycle at a specific time and then inseminate them naturally or artificially. The research was carried out on 220 goats.

He also believes this technique is far better than the normal artificial insemination used in Nepal. He is delighted that this technique has been adopted by Nepal’s Department of Livestock Services in its national programme and is replicated by the Goat and Sheep Promotion Office in other districts.

Goats are one of the primary sources of meat products in Nepal. To meet the high demand for goat-meat, Nepal imports goats from neighbouring countries. Gangaram believes that “the heat synchronisation technique could be helpful in producing quality goat-meat on a large commercial scale that could ultimately help curb the import trend.”

In addition to the practical use of his skills, Gangaram is also sharing his knowledge with a broad academic circle in Nepal. He recently presented a paper at a national veterinary conference where he highlighted the main points of his thesis. He is looking forward to implementing parts of his thesis on sperm-DNA fragmentation test in collaboration with the National Livestock Breeding Centre.

However, being an expert in animal husbandry was not always Gangaram’s dream.

Born to farming parents in Siraha, a southern district of Nepal, Gangaram grew up dreaming of becoming a medical doctor; a profession regarded as having a high reputation in the country. However, he missed entry into the medicine program by a few marks. Initially having decided to wait another year for the next exam he later applied for Veterinary Science as an alternative, and topped the entrance exam.

This led him to pursue a Bachelor of Veterinary Science and Animal Husbandry at the Institute of Agriculture and Animal Science (IAAS), commonly known as Rampur Campus. “Although veterinary science was not my first choice, I gradually began to enjoy the field of study – and I am so happy to be a veterinary doctor” says Gangaram.

In addition to excelling in the academic program, Gangaram also had opportunities to unleash his leadership potential in various capacities at IAAS. He was elected as an Executive Member of the Nepal Veterinary Students’ Association, then as Secretary of the Nepal Terai Student Committee, and was also an Editor of a magazine called Sanesh.

After completing his bachelor’s degree, Gangaram briefly worked as a faculty member at an agricultural college in Morang, and later served as a Livelihood Officer in a Non-Governmental Organisation in Nepalgunj. Finally, he joined the Government service as a Livestock Development Officer in September 2010.

While shouldering the new responsibility as a government officer, Gangaram was exploring opportunities to advance his academic career. According to him, most students with a veterinary background preferred to apply for scholarships to study in the US. However, the reputation of Australian Universities in the field of animal science, coupled with the opportunity for a fully funded scholarship, encouraged him to apply for an Australia Awards scholarship to pursue a Master’s degree program at the University of Queensland. 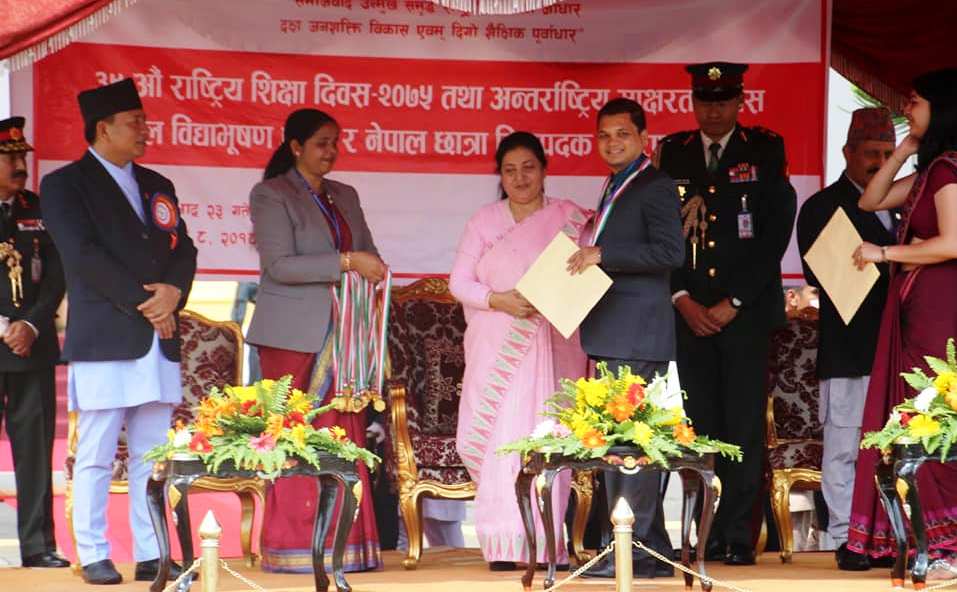 Dr Gangaram Yadav was recently conferred the Bidhyabhusan padak kha gold medal, presented by the President of Nepal Bidhya Devi Bhandari at a ceremony in Kathmandu

Gangaram shares fond memories of his university life. He is thankful to his supervisor who always encouraged him to focus on his research. Apart from the studies, he also took advantage of other opportunities at the University of Queensland, which helped him enhance his skills. He undertook a volunteering opportunity with the UQ Small Animal Hospital, which helped him improve his clinical skills. He was also the President of the Gatton International Student Association, where he made new friends from different parts of the globe. He also explored Australia, “I had great fun travelling through different parts of Australia with my wife and experiencing and enjoying Australian social life and its culture. I got the opportunity to experience all this, thanks to Australia Awards”, says Gangaram.