With Australia re-opening its international borders this year, close to 200 Australia Awards scholars from South Asia and Mongolia travelled mid-year to commence their studies at Australian universities. As these scholars start their new life in Australia, we are speaking to some of them and sharing their experiences.

For the first article in this series, we interviewed Australia Awards scholar Astha Acharya from Nepal. The challenges of a new environment, culture and institution have not daunted Astha, who commenced her Master of Disaster Resilience and Sustainable Development at the University of Newcastle in July 2022. Below, Astha answers our questions about her initial experiences as a student in Australia.

Can you share how you have grown your professional network at this early stage of your Scholarship?

I recently participated in the Asia-Pacific Ministerial Conference on Disaster Risk Reduction, which took place in mid-September in Brisbane. Many experts from Asia and the Pacific region took part in the conference and shared their expertise and work on various aspects of disaster risk reduction (DRR).

This gave me the opportunity to meet with experts from Nepal and the Asia-Pacific region who are working in the DRR sector. I met conference panellist Anil Pokhrel, Chief Executive of the National Disaster Risk Reduction and Management Authority, Government of Nepal, and Dr Amod Mani Dixit, an expert in DRR. I also had an excellent interaction with Dr Pema Gyamtsho, Director General of the International Centre for Integrated Mountain Development. Dr Gyamtsho was a panellist at the conference, discussing DRR in the context of the Hindu Kush region. I also met Manisha Dhakal from the Blue Diamond Society of Nepal, who was on a panel discussing the inclusion of LGBTQI+ communities in DRR. I learnt so much about DRR and sustainable development there and met other experts and some students studying courses related to DRR. It was a wonderful experience for me. 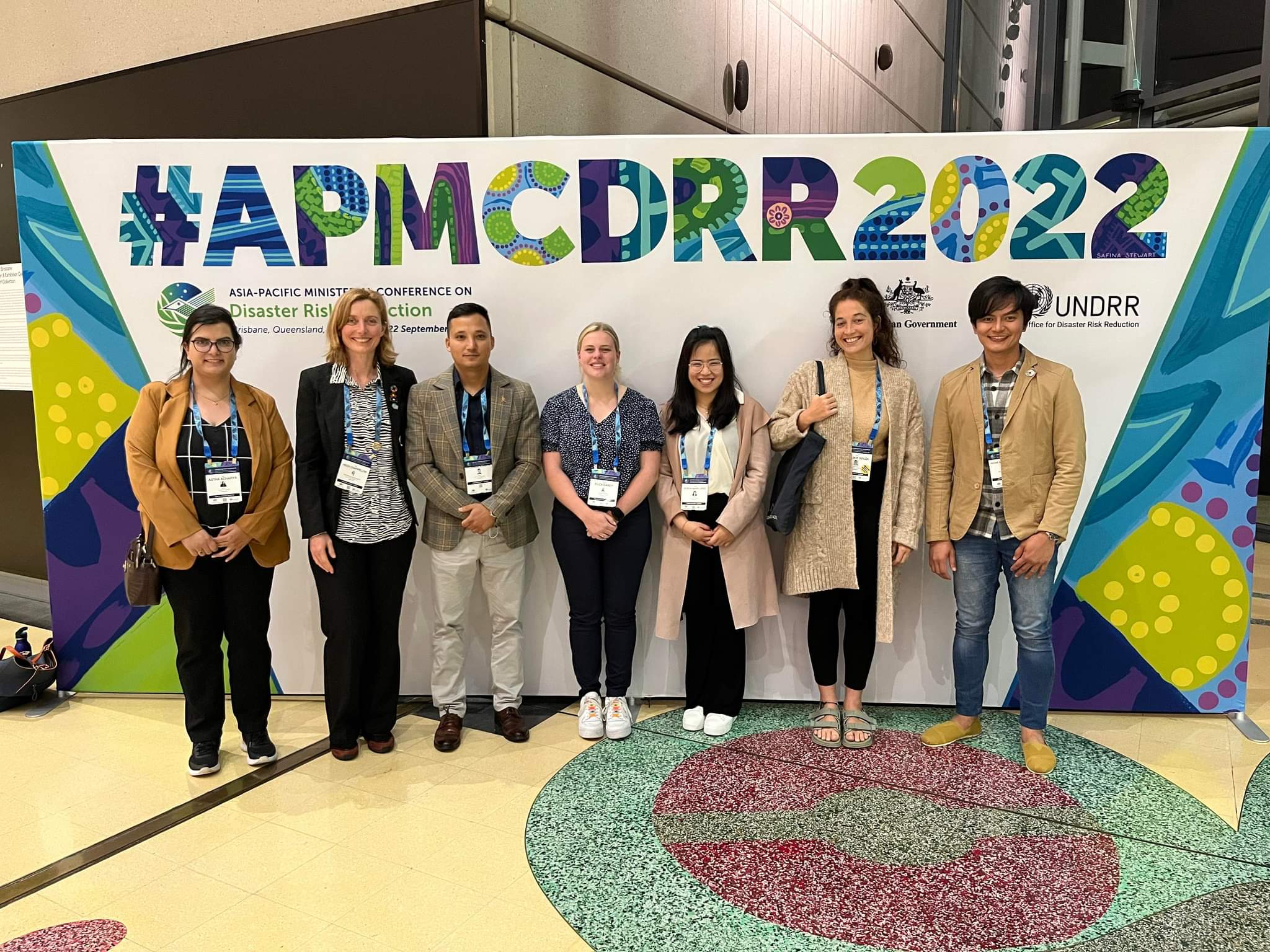 Astha (far left) at he DRR ministerial conference in Brisbane with her classmates.

How have you settled into life as a student in Australia?

It took me a while to understand how things work here in Australia. Initially, when I moved here, I used to end up at the wrong bus stops and would often miss my bus by a minute or so. I realised that time is very important in Australia, and if you are even a minute late, the bus is gone. Now, I can manage transportation through maps and asking for help from people around and from bus drivers.

Australians are very friendly. The people working in grocery stores and buses and, even random strangers will smile at you and ask you how you are doing, which was kind of a cultural shock for me. I used to wonder why strangers were smiling at me. Now I greet people in the same way, and I have adapted to the culture here.

What support networks have you used in Australia?

I had a good friend here who helped me settle in Australia. I have also made some wonderful friends from the Australia Awards cohort from different parts of the world, and they are like family to me now.  I also have made friends through my study course, some of whom are in Newcastle and are working in the disaster management sector.

Through Australia Awards, we were offered an Introductory Academic Program (IAP), which was a huge help for me to understand Australia’s education system. Interestingly, one of my IAP lecturers had never met a Nepalese person prior to getting to know me, and she was keen to understand more about Nepal. She was fascinated to learning about the diverse culture, ethnicity, wildlife, and mountains that my home country has to offer. I still meet some of my IAP lecturers who ask how my studies are going and tell me to reach out to them if I need any support. 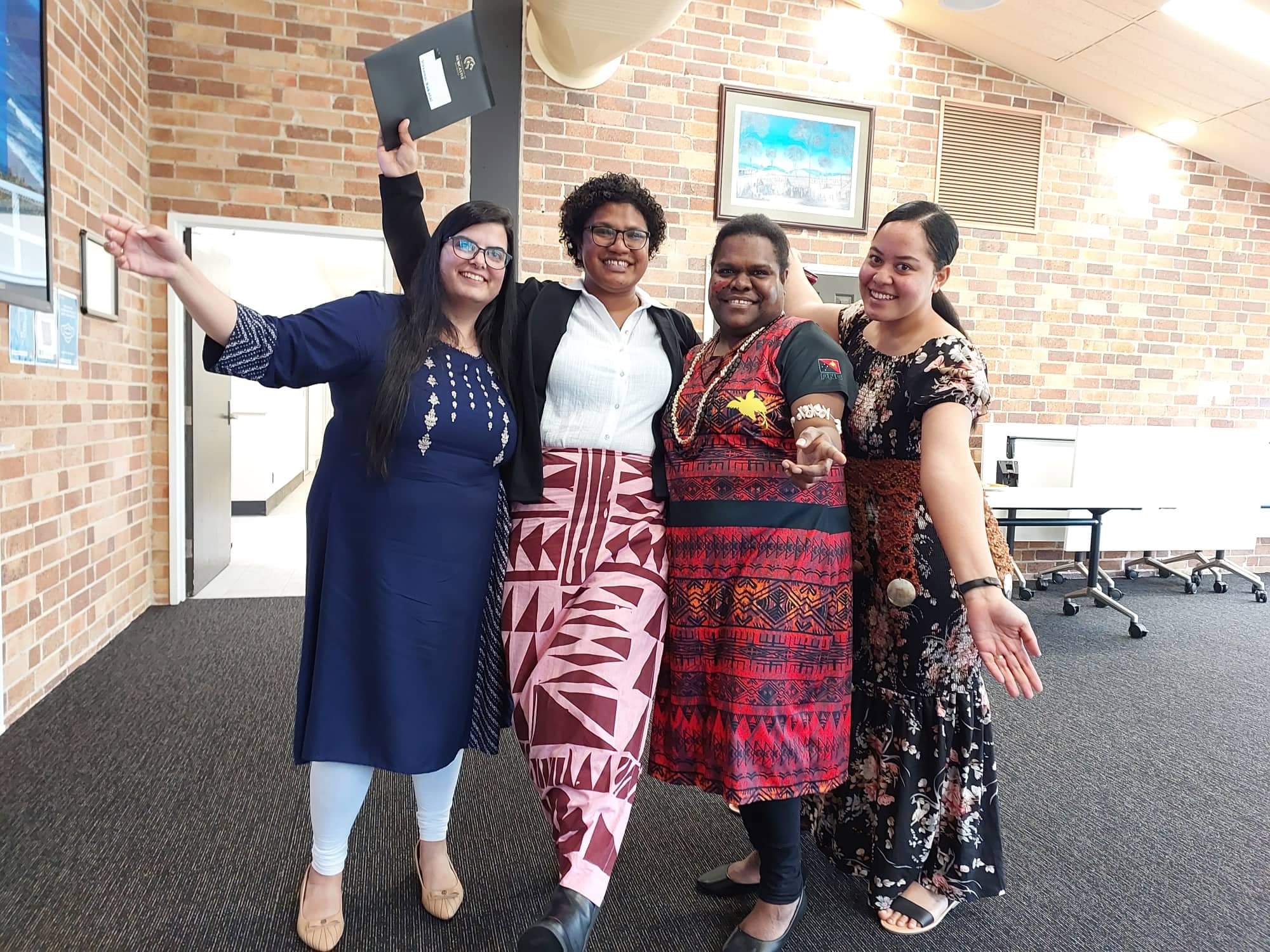 Astha (left) enjoying a moment with other Australia Awards scholars at a cultural event at the University of Newcastle.

Would you say you have settled comfortably into your new life in Australia?

There have been some things to which I have needed to adjust. For example, I don’t eat the same food I used to have daily in Nepal. Although each item is available here, it does not taste the same. I have also become more time-conscious after coming here and am very punctual now. I now feel comfortable with my routine and lifestyle.

What advice do you have for future scholars beginning their Australia Awards journey?

Shifting to a new country can be challenging initially, but after you get used to the environment, everything works well. Also, there are people in the university and from the Australia Awards team who are there to help if you have any problems, so feel free to ask for support if needed.