The story that Nar Bahadur Limbu, Australia Awards alumnus, shares about his life is truly inspirational. Despite losing his parents and his eyesight at a young age, he did not lose hope. His faith in hard work and perseverance has always driven him to keep moving forward.

Born to farming parents in Tehrathum, a remote Eastern district of Nepal, Nar’s challenges began when he was still a child. When he was just 18 months old, his father died from jaundice. When Nar was eight years old, he lost his eyesight due to severe typhoid. Tragically, he says this was preventable:

“I would not have lost my sight if I could have accessed common medicine like Paracetamol.”

To his further dismay, his mother passed away one year after he lost his eyesight.

Despite the personal losses and challenges life had bestowed on him, Nar did not lose hope and began dreaming about the future. He had a strong interest in reading, but due to his mobility constraints the school was too far for him to attend. He learned the Nepali alphabet by overhearing his school-going friends.

A great turning point in Nar’s life came when he was 11 years old. The then-Queen Mother Ratna Rajya Laxmi Devi Shah visited his district, and he had an opportunity to meet her. Seizing this chance, Nar asked the Queen Mother to arrange school for him. His request was granted; he was brought to Kathmandu and was enrolled at the Nepal Disabled Association Home for New Life, a school-cum-pre-vocational training centre.

The school primarily focused on developing skills such as bamboo craftsmanship; teaching the normal curriculum was a secondary focus. After completing Grade 5, students would be given a certificate to practice the skills that they learned in the school. But instead of becoming just a practitioner, Nar wanted to be a trainer, for which he would need to have passed high school.

Finding opportunities for further studies posed a great challenge for him. One option was to appeal to Royal family members. When Princess Shanti Singh visited his school to distribute certificates of completion, he asked for her help. Princess Singh arranged for him to be enrolled at Laboratory School – one of the few integrated schools in Kathmandu that enrolled students with visual impairment. This was a great opportunity for Nar that continuously encouraged him to stay focussed on his study. He maintained excellent track-record in the school; he passed the School Leaving Certificate examination – the final high-school exam – with first division marks.

After his outstanding achievement in school, Nar decided he wanted to be a school teacher rather than his original aspiration of becoming a handicraft trainer. He was appointed as a teacher in the newly-opened school for the visually impaired people in the far-Western district of Kailali. While working as a teacher, he also continued his tertiary studies.

After completing his undergraduate degree, Nar decided to devote his career to the disability sector. He has been actively engaged in this for 25 years and has established himself as one of the prominent disability rights activists in Nepal.

He is currently Director of the Nepal Association of the Blind (NAB), having served as NAB’s longstanding President from 1998 to 2014. NAB did not have enough resources when Nar took over the role of President. As he recalls, “I was handed NPR 3,700 and a registration file.” Today, NAB is one of the most well-resourced disability organisations in Nepal. Its central office occupies two modern multi-storied buildings in Kathmandu metropolis; its 12 district branch offices also have their own buildings. NAB also has its own printing press that prints Braille publications. 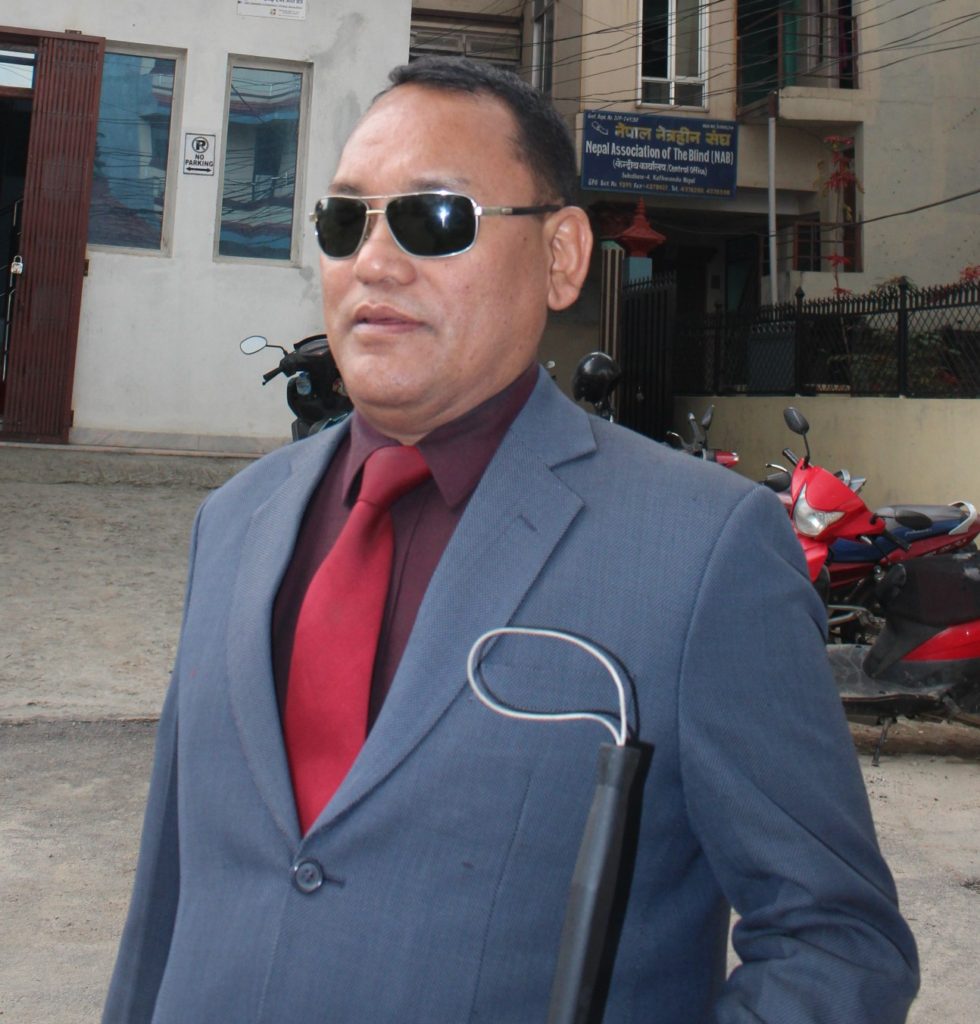 Despite reaching these career heights, Nar retains his lifelong passion for learning. Reflecting this interest, Nar is now enrolled as a doctoral student at Tribhuvan University.

Nar is an alumnus of an Australia Awards Short Course on Inclusive Education delivered by Queensland University of Technology in 2016. Reflecting on his Short Course experience, he said, “the Short Course was unique and important for me. I learned the principles of inclusive education in a semi-academic set-up”.

As part of the program, the Short Course recipients developed a Return to Work Plan identifying where they could use the skills and knowledge they acquire through the course. Nar identified working on “technology enhancement for blind and visually impaired people in Nepal” as a goal in his Return to Work Plan.

As a result of implementing his Return to Work Plan, Nar led a project developing Optical Character Recognition Software, securing funding from the Australian Embassy’s Direct Aid Program in Nepal and technological support from Kathmandu University. His organisation has also provided visually impaired teachers with training in using this software, thanks to an Alumni Innovation Challenge grant he received, offered as part of Australia Awards South and West Asia’s Regional Alumni Workshop in 2017.

Nar also received an Australia Awards Nepal Alumni Disability Initiative Grant in 2018 for his plan to “foster disability inclusive development through training for visually impaired youth leaders on the use of assistive technology”.

His next plan is to develop mobile applications to help visually impaired people in their educational experiences. He believes that “education can be inclusive only if it helps unleash the full potential of people with disability”.